*** Updated to include third anthology that I thought was in a different grouping.

Voting for the annual Preditors and Editors™ Readers' Poll has begun. I've played a role in three of the collections competing for the award.

The first: History and Mystery, Oh My! is an anthology of historical mystery stories. I had many, many good submissions for this book, so I chose a wide variety of detectives over a wide variety of years and cultures.

The second: Nightmare Noir, by Alex Azar, tells tales from the casebook of James S. Peckman, a detective who investigates supernatural crimes. I helped edit this noir collection. Peckman is a traditional gumshoe investigating some very nontraditional crimes.

The third: Strangely Funny 2 1/2, which grew out of having too many good stories to fit into Strangely Funny II. Sometimes you look at what the gods give you and say, "I want to print all of these."

I would be very pleased if you chose any one of these books.

Please go to:
http://critters.org/predpoll/antho.shtml to see the full list and vote.

Posted by Sarah Glenn at 2:49 PM No comments: 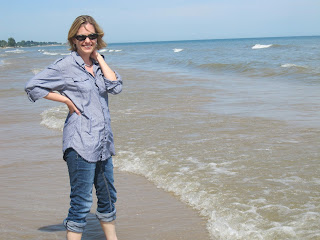 Nina Mansfield is a Greenwich, Connecticut based writer. Her debut novel, SWIMMING ALONE, a YA Mystery, was published in 2015 by Fire & Ice YA. Nina began her writing career as a playwright; she has written numerous plays, which have been produced throughout United States and in Canada, Australia, England, Ireland, Scotland and Peru. Her short plays are published by Smith & Kraus, YouthPLAYS,  Original Works Publishing and One Act Play Depot. Her short mystery fiction has appeared in Ellery Queen Mystery Magazine and Mysterical-E. Please visit her at www.ninamansfield.com.

You started as a published playwright. How does one become a published playwright?
I studied theater in college and read many, many plays. After graduating, I went to New York to pursue an acting career. It was during that time I started writing plays. Turned out, people liked them and wanted to produce them. My first produced play, NO EPILOGUE, was also my first published play. I actually wrote the first draft when I was still in college and interning at New Dramatists. I was really inspired by all of the amazing playwrights I worked with there. Each week I would read stage directions for a new play one of the member playwrights was working on, and I would witness their writing process first hand. It was an incredible experience. I guess the advice I would give to aspiring playwrights is to read a lot of plays and see as much theater as you can. Working in some other aspect of theater is also very helpful.

What drew you to writing Young Adult stories, and why mystery? Everyone else seems to be writing fantasy.
I have loved mysteries ever since I was a kid, and it is still my go-to genre. There’s something about figuring out who the culprit is that I simply cannot resist. I also taught high school English and Drama for nine years. It was actually after my first year of teaching that I decided I wanted to write a young adult novel. My students craved suspense, and I wanted to write something that would interest even the most reluctant reader.

Is there anything you find particularly challenging in your writing?
I love starting new projects; it is a challenge for me to stick with them at times because I often lose interest. Also, I am not a particularly linear thinker, so sometimes I find it difficult to sequence the events in my longer works.

What do you do when you're not writing?
Right now, I spend my time caring for a very active toddler. This takes up most of my time. Other than that, I love to read, see theater, practice yoga, create scrapbooks and travel.

What is your current project, and can you share some details with us?
Currently, I am working on revising two projects. The first is a graphic novel script entitled FAKE ID: BEYOND RECOGNITION, which is a girl-power adventure. This project is illustrated by the amazing Leyla Akdogan, and will be out with Plume Snake in 2016. Without revealing too much, it involves a serious case of mistaken identity. I am also working on revising another young adult novel: a paranormal thriller. 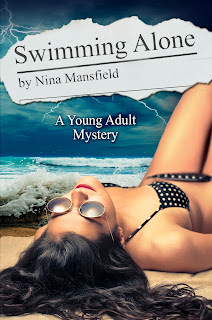 More about SWIMMING ALONE:
The Sea Side Strangler is on the loose in Beach Point, where fifteen-year-old Cathy Banks is spending the summer with her aunt (who happens to be mystery writer Roberta McCabe).  Although thrilled to be away from her psychotic, divorcing parents, with no cell phone or internet access, Cathy is positive that her summer is going to be wretched. Just when she begins to make friends, and even finds a crush to drool over, her new friend Lauren vanishes.  When a body surfaces in Beach Point Bay, Cathy is forced to face the question:  has the Sea Side Strangler struck again?
Posted by Sarah Glenn at 9:36 AM 1 comment: