Like many people these days, I'm binging shows on Netflix and Amazon. Unlike most people, this has little to do with the Coronavirus lockdown, and more to do with inheriting a smart TV from my sister-in-law. I'm finally getting to see things like El Camino and Jessica Jones, plus a ridiculous number of superhero shows.

When I saw the ads for Upload, I knew I had to watch at least the first episode. The premise: if you have the money, you can have your mind uploaded to an Internet Heaven when you die. I used to spend a lot of spare time in Second Life, and I was getting that vibe from the ads. It was a great idea, and it was up to Greg Daniels to either succeed with it or screw up.
The show did not disappoint me. Upload is a lot of fun, and I plowed through the season in a matter of days. The longest episode was the first, where the main characters and Lake View (a very tony Internet Heaven) are introduced, and it only lasts forty-five minutes. The rest of the episodes are about twenty-four minutes each. Bing, bing, bing!
Nathan Brown is a computer programmer engaged to Ingrid, a very wealthy and self-absorbed girl. When Nathan is seriously injured in an accident with his self-driving car, Ingrid pushes for him to become an upload to Lake View, where her family plans to spend their afterlives. Nathan accepts.
Lake View is visually based off the grand hotels of the early twentieth century, with virtual bellhops and large rooms where the dead meet and make new friends. The exterior shots taken for the place are from the Mohonk Mountain House, which I'm adding to the list of hotels I'd like to stay in (the Chateau Frontenac and the Grove Park Inn are on the same list).
Every resident of Lake View has an Angel, someone available 24-7 to answer questions and serve the needs of the well-heeled residents. Nathan's Angel is named Nora, and it's hard not to like her. She and the other Angels work cheek to jowl in a large room with rows of computer screens, and they aren't paid very well. Nora's father is dying of vape lung, and she wants to borrow enough money to get him into Lake View. Unfortunately, Nora's ratings aren't high enough at work (or in the bedroom, which is another story) and her boss is a petty bitch. Her father also wants to go to 'regular' Heaven to be with her mother, which means when he's gone, he's gone. Nora's emotions bleed over into her job, and Nathan, hungry for real interaction, is supportive. She begins to bond with him.
Meanwhile, Nathan has his own problems. Since Ingrid is paying for everything, his existence is dependent on her happiness and whims. She dresses him in kneepants for his own funeral (perhaps she likes calves?) and considers 'pausing' him when she's too busy with other things. He also has some damaged and missing memories, which isn't supposed to happen with the elite service Ingrid is paying for.
Nathan begins puzzling about it, sharing his concerns with the other uploads. I goggled when they introduced his neighbor across the hall - William B. Davis, best known for playing the Cigarette Smoking Man on the X-Files. The character, David Choak (Koch backwards, I presume), is fabulously wealthy and takes an interest in Nathan. He doesn't believe Nathan died in a freak accident; he believes Nathan was murdered. And if CSM says that, you can take it to the bank.
Nora joins Nathan in his quest for the missing memories, risking her approval ratings and even her job. Before the end of the first season, she's also risking her life.
Upload is a great dystopian sci-fi comedy, with hilarious situations and a handle on cultural developments down the road. One of Nathan's new friends is a kid who's been dead for at least a decade, but is still stuck in a child avatar. They sneak off to the virtual black market and the kid buys a puberty upgrade - which doesn't work out the way he planned. When Nora's dad takes a tour of Lake View, technical problems turn Nathan and the horses they're riding on into block figures. Corporate branding is everywhere, including on the leaves of the trees. Pop-up ads appear regularly in public rooms and paths, just like they do on Second Life. Angels promote virtual products, and receive bonuses if their clients buy.  And everyone is given rating stars for their performance in everything, including the bedroom.
I recommend watching the show. It's full of entertainment and a lot faster than reading this review.

Posted by Sarah Glenn at 7:42 PM No comments: Links to this post

Circa ten years ago, I wrote a post about two young men who consumed a large amount of nutmeg in pursuit of a legal high. Chubbyemu, one of my favorite YouTubers, presents a more recent case of a fellow who took it even further:

Posted by Sarah Glenn at 6:09 PM No comments: Links to this post

Email ThisBlogThis!Share to TwitterShare to FacebookShare to Pinterest
Labels: nutmeg

Posted by Sarah Glenn at 6:24 PM No comments: Links to this post

Gwen and I both love to visit Philippe Park in Safety Harbor. There's no beach or swimming, but it's a great place to meditate on the lapping water of Old Tampa Bay or climb the Tocobaga Temple Mound for a top-down view.
Recently, I began following Christopher Gettings on Instagram for his photos of nature, especially the ocean. Here are some recent photos he took at Philippe Park. Enjoy!

Posted by Sarah Glenn at 6:19 PM No comments: Links to this post

Email ThisBlogThis!Share to TwitterShare to FacebookShare to Pinterest
Labels: Florida

Gwen and I are participating in a group giveaway/free on Kindle Unlimited promotion this week. Check it out for our new book, plus a bunch from other indie authors! 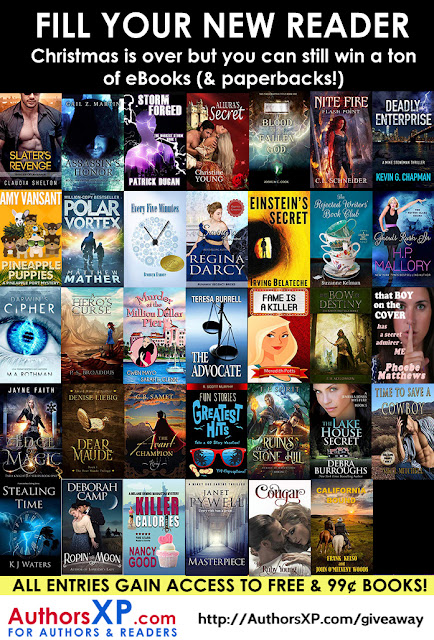 Posted by Sarah Glenn at 7:03 AM No comments: Links to this post

Pines by Blake Crouch
My rating: 4 of 5 stars

I picked this book up on a recommendation from Crimereads, and was swept up immediately.
I didn't know the genre, didn't know that it was the first of a series, or that it was even on television. The novel begins with a basic thriller lure - Secret Service agent comes to small town in search of missing agents - and plunges deep into dystopia by the end. Ethan Burke, the aforementioned agent, has been injured in a car accident and doesn't even know who he is at the beginning of the book. His memory begins to come back, but he doesn't remember the investigation's details or what he discovered before waking up on the streets of Wayward Pines. I'm a sucker for an amnesiac hero (see Nine Princes in Amber by Roger Zelazny), or a hero who no longer has vital information he needs (also see The Face of a Stranger from Anne Perry), so I ate this up. I also plowed through the book in one evening, because this tale demands commitment.
The town appears, at first, to be cookie-cutter Suburbia with an unhelpful sheriff. There's also the unhelpful hospital, and the unhelpful new receptionist at Ethan's home office who never seems to pass Ethan's urgent telephone messages on to his superior. It goes downhill from there, and soon our hero is on the run, ducking the law and the local angry villagers--er, residents--who throw parties when they're eliminating outliers. The only friendly person he meets is Beverly, a woman who came to Wayward Pines in 1985--and appears not to have aged.
This is not a novel of pretty words; it's one of action. The reader never rests. Ethan is always running, hiding from the residents of Stepford North, or, later, climbing up cliffs. I followed him, leaping from mental crag to mental crag. It's also in Sensesurround: because he's injured, only partially clothed at times, and has no money, he's cold and constantly hungry. I live in Florida, and had to put my slippers on for protection from the imaginary elements. It's a good read, and when you get to the reveal, you will either be excited or disappointed. I was intrigued. I'm not sure I would try the TV series; I already have some very clear mental pictures of the place and the characters. Other books in the series, however, are a definite possibility.

View all my reviews
Posted by Sarah Glenn at 8:13 PM No comments: Links to this post 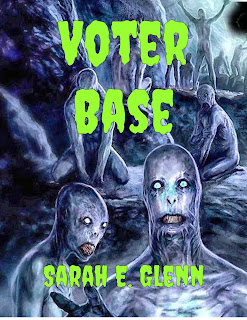 Posted by Sarah Glenn at 7:13 AM No comments: Links to this post