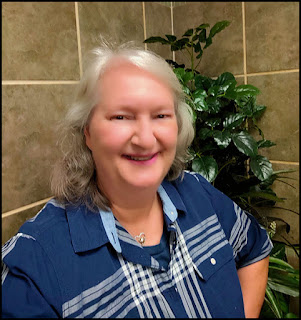 About the author: Edale Lane is the author of an award winning 2019 debut novel, Heart of Sherwood. She is the alter-ego of author Melodie Romeo, (Vlad: a Novel, Terror in Time, and others) who founded Past and Prologue Press. Both identities are qualified to write historical fiction by virtue of an MA in History and 24 years spent as a teacher, along with skill and dedication in regard to research. She is a successful author who also currently drives a tractor-trailer across the United States. A native of Vicksburg, MS, Edale (or Melodie as the case may be) is also a musician who loves animals, gardening, and nature. 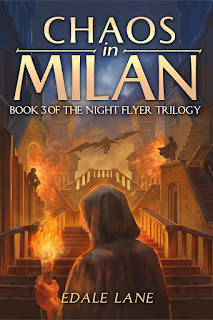 The Night Flyer Trilogy is a blending of drama, action, mystery, and romance creatively splashed on the backdrop of Renaissance Italy. One protagonist is an inventor’s child and student of Leonardo da Vinci who has a secret identity as the masked vigilante known as the Night Flyer, because of a set of glider wings granting the power of flight; the love interest is a young widow, mother of two, whose brother is one of the richest merchants in Milan. Both of them are women. One of my beta readers gave me an interesting response: “I’ve never read a lesbian romance before; turns out, it’s just romance.”

I was always taught, “Write what you know.” When one is a woman who loves women, I suppose telling a story about women like me is the natural thing to do. I am also a historian, so that is where my passion lies. One of my philosophies about history is that while styles, governments, religion, culture, and technology have changed drastically through the ages, basic human nature hasn’t. People of the 1500’s had most of the same hopes and dreams, fears and ambitions as we do. They went to their jobs, looked after their families, and wished for something better, be it health, position, wealth, or love. Dangers abounded from much of the same sources as they do today—criminals, war, bankruptcy, wild animals, natural disasters, and social ostracism. Maybe they didn’t worry about car wrecks, but being run down by a panicked horse or injured in a carriage accident were genuine possibilities. Some people were religious, others not so much, and social functions were just as important in the caveman’s life as they are in ours. We aren’t that different from the characters in Chaos in Milan—we just have computers and cell phones. And just like modern times, as long as there have been people, there have been women who loved other women, and men who loved other men. Like today, they were the minority, and history has ebbed and flowed with the acceptance of and opposition to these relationships, just as there were matriarchal societies in the past in addition to patriarchies. There is nothing new under the sun.

I know Madelena and Florentina because they are me. I became a widow at a young age with two small children just like Maddie did. I, too, had always been attracted to girls but felt compelled to fill my “proper role” and meet everyone’s expectations. Like Maddie, I had a good husband and loved my children more than anything in all the world, but upon becoming a widow was faced with a decision: do I continue to live the life others have planned for me, or do I now get to choose to be who I really am? Florentina loves learning, music, art, nature, and has a thirst to constantly expand, improve, and experience more of life. She is creative, resourceful, and fearless; she also hides behind a mask, keeping her true identity secret. I am also Florentina. Her day job is as a children’s tutor; I was a teacher for twenty-four years. I had a secret identity for most of my life, because when and where I grew up, you simply weren’t gay. I could have lost my job, been kicked out of my church, or ostracized by family and friends if anyone ever found out. Truly, I was a phenomenal actress hiding behind a mask of normality. Thankfully, those of you today who read my books live in a different, more accepting world.

What really sets a lesbian romance apart from a “regular” romance? Two people meet: maybe they are attracted to each other right away or the total opposite, but at some point in the story they realize how they feel. There is excitement, but also insecurity. What if he or she doesn’t feel the same way? Do I risk losing a friendship to possibly gain something more? There are obstacles to overcome, and with the Night Flyer Trilogy life and death situations to get through and mysteries to solve. The only thing that sets these books apart is that the love develops between two women; that is also the only thing that sets me apart from my straight friends. We like the same movies, laugh at the same jokes, attend the same churches, and listen to the same music. We all love our pets and our families; I just have a wife instead of a husband, and even that isn’t so different because it’s just as hard for me to get her to put her dirty clothes in the hamper instead of on the floor as it was to get my male husband to pick up his!

Edale Lane novels are historical fantasy lesbian romances with action and intrigue thrown in to boot, but they are not erotica. The reader will never be shocked with detailed love-making scenes or explicit language, however there will be fight scenes and even epic battles. Chaos in Milan features two strong women, each with a unique skill set, who work together to secure their own happiness, safety, and that of those around them. There are also several important subplots that carry throughout the series, including Antonio’s star-crossed romance with the daughter of a family rival and villain of book one, Don Benetto, who subsequently sets out on a road to redemption. Who is behind the assassination attempts? What clues can our heroes uncover in the Chaos Manifesto? What new weapon will the Night Flyer invent this time? How can a wealthy widow and a hired tutor from different classes but the same gender ever realize their desire of making a life together? Find out in Chaos in Milan! 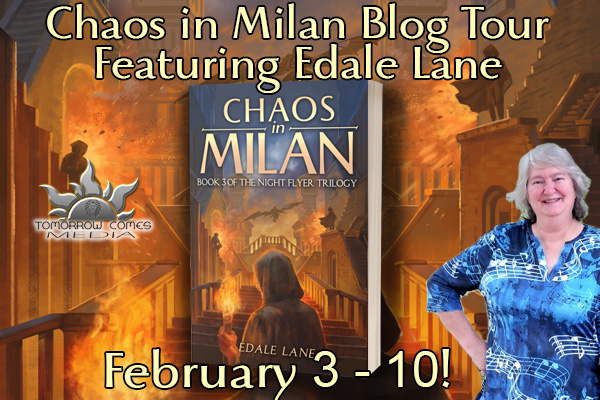 One woman stands between chaos and order – the Night Flyer.

When chaos strikes at the heart of Milan, it is up to Florentina’s alter-ego the Night Flyer to stop it. As Florentina and Madelena’s love deepens, so does the well of danger surrounding them. The race is on to discover the mysterious Shadow Guild and uncover who is behind the deadly rampage, but Florentina’s mission is threatened by a gang of assassins. Can the Night Flyer prevail, or will Maddie’s love be ripped from her arms?

Chaos in Milan is the third book in Edale Lane’s Night Flyer Trilogy, a tale of power, passion, and payback in Renaissance Italy. If you like action and suspense, rich historical background, three-dimensional characters, and a sweet romance, then you’ll want to complete the Night Flyer saga.

Posted by Sarah Glenn at 7:00 AM No comments: