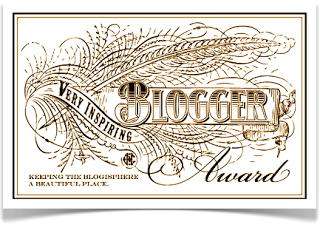 Marian Allen named my blog as one of her Very Inspiring Blogs for my actions in the face of adversity. And here I thought I was just carping and whining.

Display the award logo on your blog.
State SEVEN facts about yourself.
Link back to the person who had already nominated you.
Nominate seven other bloggers who deserve this award.
Notify each of the bloggers of your nomination.

2. I took classes in dancing during college. Because I enjoyed it, not because I was necessarily good at it.

3. My burning ambition in my teenage years was to write and draw for Marvel comics.

4. Many authors start with fanfic. But did you know that my first fanfic was inspired by The Black Stallion?

5. I co-founded a Pagan church in Kentucky. My official position, as I described it to the IRS, was 'genetrix'.

6. I still buy Pretenders albums. Yeah, it's no longer the Eighties, but Chrissie Hynde isn't dead.

7. I loathe James Joyce's writing, no matter how much Joseph Campbell loved it.

My most inspiring blogs:

1. I gotta kick the first one back to Marian. She finds joy in the littlest things.

2. Doctor Grumpy in the House: Dr. Grumpy's posts about strange patient encounters are hilarious, but he also gives us insights on American history. The Love Boat - 1863 is probably my all-time favorite.

3. The SL Newser. Coverage of the arts and community in Second Life. A great boost to the creatives there and a revelation of how many good-spirited people there are in SL.

4. Other Things Amanzi. This is the blog of "Bongi", a surgeon who works in Mpumalanga, South Africa. His observations about life, surgery, and his area of South Africa always take me out of myself. It's a whole other world. He doesn't post enough.

5. Gwen Mayo's blog. Yes, she's my spouse. Her view of our shared life, however, does the same thing Bongi's posts do.

6. Magpie a la modus operandi. Marguerite's great personal accounts about her life that make observations about life in general. Perseverance is a virtue after all.

7. Terribleminds: Chuck Wendig. His combination of writer's coaching and drill-sergeant language inspires me to get back on the keyboard when I think my writing sucks.

I found this while doing research for the novel Gwen and I are writing together. Great information and engaging reading!

Sears Homes of Arlington Heights and Mount Prospect: Aladdin City: the “Town Where Homes Will Rise Almost Over Night: The Aladdin Company of Bay City, Michigan was a competitor of Sears in the mail-order house business. (Click link to learn more. LOVED it.) 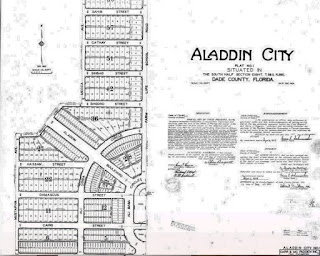 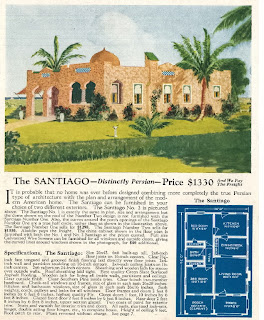