Apropos of nothing. There are a lot of cheesy songs out there, but these provoke a strong reaction from me.

1. We Built This City by Starship
Poll after poll says this is the worst song of the Eighties. There's a reason.

2. I've Never Been to Me by Charlene
Utter dreck by a failed Blossom Dearie. You are not a destination; you are the journey. There's your pop psychology.

4. Hey Jude by The Beatles
I love The Beatles, but this song is too fucking long.

5. The Girl is Mine by Jackson and McCartney
I have a story about this one: I was visiting a friend in the dorms at OSU. The guy across the hall played this song six times in a row. When he started the seventh repetition, my friend loaded up some bagpipe music and turned the volume to eleven. Bagpipes FTW.

6. Never Be the Same by Christopher Cross
"It was good for me, it was good for you" is not a good description for a relationship that had any meaning.

7. Wake Me Up Before You Go-Go by Wham
I love George Michael... but, gaaaahhhh.

8. Ice Ice Baby by Vanilla Ice
Stole a riff from Queen and Bowie and denied he'd done it. I hate him for making me turn up the radio only to be disappointed.

10. Everybody Wants to Rule the World by Tears for Fears
Sorry, this pair always struck me as pretentious entitled pricks. Instant change of channel.

If you have a song you loathe, feel free to post it in the comments. I've probably heard it.
Posted by Sarah Glenn at 1:02 AM 1 comment:

Email ThisBlogThis!Share to TwitterShare to FacebookShare to Pinterest
Labels: music

Resistant by Michael Palmer
My rating: 4 of 5 stars

This final book of Michael Palmer's is one of his best. I've read most of his books, and he grew substantially as an author over the years. In his early books, the medical details were good (of course), but some of the side characters felt a little flat. Also, if the hero was male, there was a good chance that the girlfriend or wife would be one of the villains. Most of the plots revolved around greedy corporations. I think 'The Last Surgeon' and 'Fatal' were probably the best of the early books.

Later, he turned to conspiracies involving political figures, most notably the president. The story was about the doctor to the president, the president as a doctor, etc. In the midst of these was a gem of a book called 'The Second Opinion'. For the first time, the characters were more interesting than the medicine.

'Resistant' blends good characters with a vile plot and the most interesting terrorist group I've seen in a book. The One Hundred Neighbors, all string-pullers and conspirators worthy of a James Bond novel, follow the teachings of Lancaster Hill, a (fictitious) vehement opponent of FDR's social programs who preached resistance to the government. Each chapter opens with a quote from Hill, and the resemblance to Ayn Rand-type 'every man for himself' philosophy is striking.

Hill proposed the One Hundred Neighbors as a group of covert movers and shakers who would bring down the government and its evil social programs. The Neighbors unleash The Doomsday Germ, a nosocomial infection with chameleon properties.

Enter Dr. Lou Welcome, ER doctor and recovering alcoholic. Welcome's life parallels the author's life in some ways, and is probably the character closest to a Mary Sue Palmer has written. He has no problems hitting Welcome hard, though, and shows no special favors.

Cap Duncan, Welcome's AA sponsor, falls during a jog through mountainous terrain and breaks his femur. He is airlifted to the hospital and seems to be on the mend until The Doomsday Germ infects his wound. Welcome begins to investigate ways to fight the infection, and quickly draws UN-welcome attention from The One Hundred Neighbors and the FBI.

One of the government's top researchers into the bug has been kidnapped by a mole in the FBI. Welcome, who has been pointed in some interesting directions from an unlikely-seeming source (a pharm tech with severe spastic cerebral palsy), has been asking questions that are too well-informed not to seem suspicious. Soon, he is on the run from the Neighbors and the authorities.

The kidnapped scientist is being held in a cliffside fortress that, once again, makes one think of a James Bond film or, perhaps, The Eiger Sanction. Naturally, to save his friend Cap, Welcome winds up scaling the cliff with a renegade FBI agent to rescue the scientist (plus his pharm tech buddy, also kidnapped) and stop The Doomsday Germ.

There are a few moments that stretch credulity (my favorite was the six-story cannonball into a swimming pool), but overall the action was enjoyable. What I found more rewarding was the diversity of the supporting cast: the government researcher was a devout Muslim, and Humphrey, the pharm tech with CP, turned out to be far more important to the plot than a mere 'token'.

Palmer also managed to surprise me with one of the mole characters, one that was logical in retrospect but was easy to underestimate. I won't reveal who that was here.

In terms of scientific intrigue, characters, action, and clashing ideologies, I think this book was a real winner.

View all my reviews
Posted by Sarah Glenn at 9:38 PM No comments:

"Too much trouble, and you'll end up just like your crazy mother." 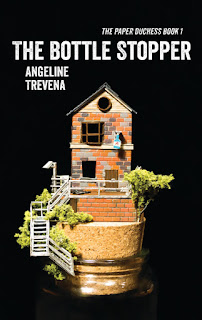 Maeve was six when they took her mother away, and left her in the care of her Uncle Lou: a drunk, a misogynist, a fraud.
For eleven years she's lived with him in Falside's slums, deep in the silt of the Falwere River. She bottles his miracle medicine, stocks his apothecary shop, and endures his savage temper.
But as his violence escalates, and his lies come undone, she devises a plan to escape him forever. Even if it means people have to die.

Not All Medicine is Good for You; Better Check the Label


Never one to let a good character die, British horror and fantasy author Angeline Trevena has accumulated several characters from previously unfinished books, to populate the dystopian world of The Bottle Stopper.
Currently available for pre-order on Kindle, this tense adult horror tracks the story of Maeve, as she devises a murderous plan to free herself from her violent, abusive uncle. 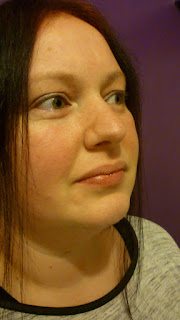 Born and bred in a rural corner of Devon, Angeline now lives among the breweries and canals of central England, with her husband, their son, and a somewhat neurotic cat. She's been writing since she was old enough to hold a pen, and released her début novella, Cutting the Bloodline, in May.
The Bottle Stopper, the first book of The Paper Duchess series, is set 100 years after the world we know today, in a society where the birth rate of girls is at a catastrophic low. Desperate for protection, women turned to the state, but that protection came at a price. Namely; their freedom
Maeve lives outside of the overbearing administration, in the slums of Falside. Having been torn from the arms of her mother at six years old, Maeve, now seventeen, works in her uncle's apothecary shop, bottling his medicines. But these are not medicines that are going to make anyone better. In fact, once Maeve puts her plan into action, they may well be deadly.

“Angeline Trevena, with her ever fertile imagination, creates dystopian visions of the future that are both innovative and chilling. ”
-Tony Benson, author of dystopian thriller, An Accident of Birth