The Other Surprise Derby Winner

Yesterday's Derby was a major surprise. For the first time in Derby history, a winner was disqualified due to infractions during the race. Country House became the official winner after Maximum Security had already done a victory lap.

We no longer live in Kentucky, but we did go to the Derby Party thrown in our mobile home park. My sister-in-law is visiting, and she threw together a lovely hat at short notice.

While the television announcers talked about past Derbies, gave the changing odds on favorites in the current race, and interviewed trainers and jockeys, our group staged races with stick horses. There was betting going on with these races, too, but no one was going to win or lose big at a quarter per ticket.

We placed a wager at my table on the Big Race. Since I didn't know anything about the horses running this year, I chose Tacitus. I spent several years as a classics student, so it was a natural for me. Furthermore, it sounded like a real Derby winner name. The first time I was asked to identify Aristides on a test, I replied that he was the winner of the original Kentucky Derby. Oh, and that he was an Athenian statesman.

None of our horses won. However, Tacitus took third place after the judges declared the official winner of the race. Since I was the only one with a horse on the board, I won the pot. It was a pleasant evening with a suprisingly rewarding ending. 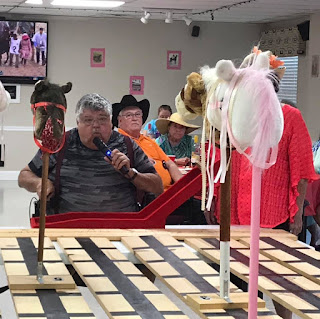 Posted by Sarah Glenn at 3:08 PM No comments: