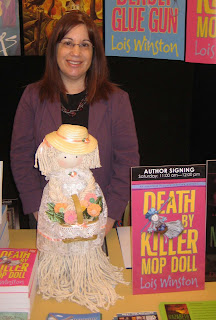 What better place to talk about sinister characters than a blog titled, The Sinister Scribblings of Sarah E. Glenn? Thank you, Sarah, for inviting me to guest blog here today during my month-long blog tour for the release of Death By Killer Mop Doll, the second book in my Anastasia Pollack Crafting Mysteries series.

Yet, we remain fascinated by villains. They often drive the story with their complex natures. Why would someone do such evil things? We want to know what drives these madmen and women to commit the crimes they do. Who wasn’t totally intrigued by Voldemort’s back-story? Or Darth Vader’s?

However, too often authors succumb to writing stereotypical villains. Even the most vile of vile villains has to have a reason for his vileness. Snidely Whiplash is one-dimensional. We want to read about 3-dimensional characters, and that’s not limited just to the protagonists of a story. Villains count. They drive plots forward. Without them, we have no conflict.

Who are some of your favorite fictional villains? Post a comment, and you could win one of five signed copies of Death By Killer Mop Doll I’m giving away as part of my January blog tour. The full tour schedule can be found at my website, http://www.loiswinston.com, and the Killer Crafts and Crafty Killers blog, http://www.anastasiapollack.blogspot.com. In addition, I’m giving away 3 copies of Death By Killer Mop Doll on Goodreads, http://www.goodreads.com/giveaway/show/15173-death-by-killer-mop-doll 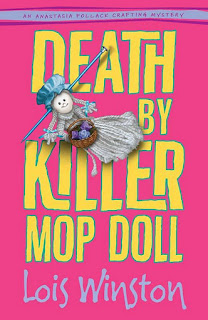 Bio: Lois Winston is the author of the critically acclaimed Anastasia Pollack Crafting Mysteries published by Midnight Ink. Assault With a Deadly Glue Gun, the first book in the series, received starred reviews from Publishers Weekly and Booklist and was recently nominated for a Readers Choice Award by the Salt Lake City Library System. The new year brings with it the release of Death By Killer Mop Doll, the second book in the series.
Read an excerpt at http://www.loiswinston.com/excerptap2.html.
If you're considering starting at the beginning of the series, a good review of Lois' first novel appears on Kevin Tipple's blog.

Visit Lois at her website: http://www.loiswinston.com and Anastasia at the Killer Crafts and Crafty Killers blog: http://www.anastasiapollack.blogspot.com. You can also follow Lois and Anastasia on Twitter @anasleuth.

Friday, January 27th, we’re having a special guest on the blog: Lois Winston, the author of Assault With a Deadly Glue Gun and Death By Killer Mop Doll, will let us know about her favorite sinister characters. She’s also going to be giving away some signed copies of the just-released Death By Killer Mop Doll to people who comment on her posts, so pay extra attention this week! Giveaways are rare in this economy, and even rarer on this blog.

For a good review of Lois' first novel, check out Kevin Tipple's review of Assault With a Deadly Glue Gun.

In other news: because my office is under the aegis of UK HealthCare, we have to fulfill the same requirements of all HealthCare employees, even though we don’t see patients and aren’t even located in one of the clinic buildings. This includes annual training on the safe handling of air tanks and recognizing signs of elder abuse. On Friday, I get to have a mandatory interview with Employee Health. I’ve been told to bring my most recent vaccination papers to the appointment. I’m wondering what they’re going to do with me: the last time I needed vaccination papers was when I was in the Fayette County Public Schools, which I graduated from in 1980. They were in the custody of my parents, and after several moves, including one overseas, I doubt that they still have them or even dreamed that they might be needed one day.

What makes me feel even older? My last tetanus shot was received ‘around the turn of the century’, which I associate with 1901, not 2001.

The proper term for the appointment, IMO, is ‘interview’ rather than ‘checkup’ because the co-workers who’ve gone through it tell me that there is no examination involved. If they think I’ll be applying for sick time to cover my time out of the office, they’re in for some kicking; it’s a condition of employment, and planning to be sick is also called malingering.