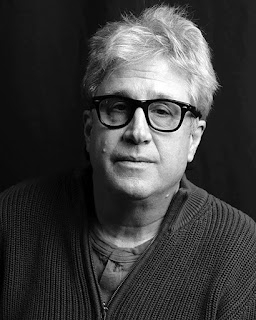 Over the past 25 years, Michael Williams has written a number of strange novels, from the early Weasel’s Luck and Galen Beknighted in the best-selling Dragonlance series to the more recent lyrical and experimental Arcady, singled out for praise by Locus and Asimov’s magazines. In Trajan’s Arch, his eleventh novel, stories fold into stories and a boy grows up with ghostly mentors, and the recently published Vine mingles Greek tragedy and urban legend, as a local dramatic production in a small city goes humorously, then horrifically, awry.
Trajan’s Arch and Vine are two of the books in Williams’s highly anticipated City Quartet, to be joined in 2018 by Dominic’s Ghosts and Tattered Men.
Williams was born in Louisville, Kentucky, and spent much of his childhood in the south central part of the state, the red-dirt gothic home of Appalachian foothills and stories of Confederate guerrillas. Through good luck and a roundabout journey he made his way through through New England, New York, Wisconsin, Britain and Ireland, and ended up less than thirty miles from where he began. He has a Ph.D. in Humanities, and teaches at the University of Louisville, where he focuses on the he Modern Fantastic in fiction and film. He is married, and has two grown sons.

What made you decide to start writing your own stories?
I think most every kid is in love with hearing and telling stories.  It's hard-wired in how we understand things and how we learn.  The big transition for a few people, though, comes at the moment when they say to themselves that they'd like to make storytelling a lifelong pursuit.
For me, that happened at 13 or 14 when I read Tolkien's Lord of the Rings for the first time. In chapter 3 of The Fellowship, there is a moment when the hobbits get off the road at the approach of someone—someone who turns out to be one of the Dark Riders of Mordor, who attempts to sniff out (literally) our heroes in the undergrowth.  I remember lifting my eyes from the page and realizing I had been immersed in Tolkien's world—completely there—for almost half an hour.  From that experience and a number that followed, I decided that creating that effect was something I wanted to do forever.

Which authors influenced your writing?
Obviously Tolkien, when it came to world-building and the use of myth and legend to inform and underlie the way my stories worked.  Several of the great magical realist writers—Garcia Marquez and Borges come to mine—for the way they wed the everyday with the wondrous.  My old mentor John Gardner (author of Grendel and The Sunlight Dialogues) taught me invaluable things, and there are half a dozen or so poets (among them Yeats, Dylan Thomas, and Ted Hughes) who were very formative for me around the time I really became serious about writing. 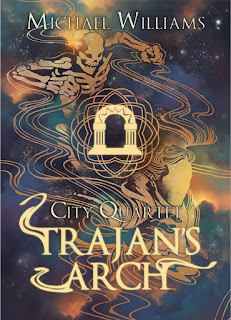 I'm a bit of a tyro in the humanities. What is the Modern Fantastic?
I'm thinking this question stems from your reading that I teach courses in the Modern Fantastic at the University of Louisville.
It's pretty much what it sounds like: fantastic fiction, film, and art from the middle of the 19th century to the present day.  The late 19th century, for me, is that time in history when we began to look at fantastic worlds as mental or psychological landscape, when these stories help establish the theory and vocabulary of thinkers like Freud and Jung.  Just think “fantasy from the 1880s to the present.”

Tell us about the City Quartet. Which cities are involved, and can you tell us a little about each story?
One city—Louisville, Kentucky, in both an historical and an imagined version.  These are four novels (you can enter the world of the books through any one of them—there's no designated reading order, no idea of linear “sequence” or “series”).  The stories of the books interweave, so that a principal scene in one novel might be glimpsed in passing in another, a principal character in one might make a cameo appearance in another.  In short, the books speak to the connections that bind us all in location and in history, and one of their major areas of meaning is in how our lives intertwine, how we depend and rely on each other.


How did you get from a triumphal arch in Italy to modern-day Louisville?
Sheer imagination, metaphorically and literally. The triumphal arch is present  only in an article Gabriel reads during his initial fascination and curiosity with Trajan. The real “arch” is the series of stories Trajan Bell has written, inserted in the novel and over-arched, you might say, by the novel itself.  There's another arch late in the book, but to say much more would be letting spoilers slip.

Is there a new author or book out there that you think we should be reading, and why?
I'm interested right now in more “world fiction”--magical realist stories from outside the Anglo-American world (and, for that matter, non-European writing).  Two women writers, strikingly different from each other, I've been reading with some pleasure.
Karen Lord is a writer from Barbados, with roots in Senegal.  Her Redemption in Indigo is a darkly funny mythic journey, a retelling of the folktales centering on the West African legendary figures of Anansi the Spider and Ansige Karamba the Glutton.
Lesley Nneka Arimah is a Nigerian writer who mingles magical realism and speculative fiction with the very realistic treatments of the harsh political realities in her native country. Her What It Means When a Man Falls From the Sky is a stunning collection of short fiction.
Recommending the work of both these writers is my gift to you, my thanks for giving me space to talk about my own work.

Many thanks! Trajan's Arch is now available from Amazon and Barnes and Noble. 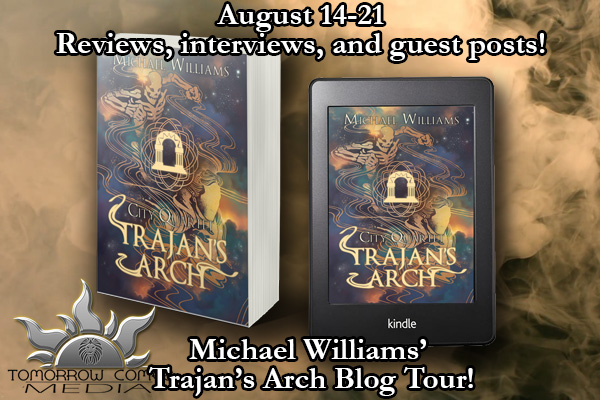 Email ThisBlogThis!Share to TwitterShare to FacebookShare to Pinterest
Labels: interviews

Ah, August. A time when my email boxes overflow... Strangely Funny submissions are pouring into the MAHLLC coffers, and my personal email has become a FEMA flood zone of politicians pleading for money. Volunteering is the gift that keeps on giving...
An update on the past few months:


I'm glad that my life is coming back together. We'll see what these changes bring.

Posted by Sarah Glenn at 9:58 PM No comments: