Today is Pulmonary Hypertension Blogging Awareness Day. Sorry if this isn't a detailed enough entry, but I thought I just had to be 'aware' this month, not blog about it.


Trust me, though, I am always aware of PH. My father has it. Not only does he have it, he has it secondary to sarcoidosis, which is a rare complication of a rare disease. I always knew he was exceptional, but he should have limited himself in this regard.


What is pulmonary hypertension? It is not the 'regular' hypertension you see in the drug commercials on TV, and it can't be measured by an arm cuff. Basically, pulmonary arterial hypertension is high blood pressure in the artery that takes the blood from your heart to your lungs... you know, where it gets the oxygen your body needs. The general cause? Narrowing/blockage of that artery or in the blood vessels of the lungs. Your body WANTS that oxygen, it NEEDS it, but the pipelines are blocked. The heart pushes harder. The blood backs up and the pressure increases. Honestly, it's easier to understand if you think of it as a plumbing problem.


Consequences? Shortness of breath and feeling faint are common symptoms. You're trying to get more oxygen into your body, but the problem is really that the blood has slowed to a trickle. Your heart may try to beat its way out of your chest or you could develop chest pain at even minor exertion. Taking oxygen helps. Dad has one of those little rolly oxygen concentrators now.


Plus, EVERYTHING tires you out. You don't have that much oxygen to work with, so your energy burns out quickly. This sucks, especially if you're impatient, a workaholic, or a general Type A person. What sucks even more? Some people with PH need medication delivered directly into their hearts. They carry a pump on their person at all times, and it has a tube that literally goes INTO your body and enters your heart! What sucks the most? Eventually, the high blood pressure will damage your heart.


Dad was diagnosed with sarcoidosis when I was 16. I'd like to say that only five years had passed since then, but you've already seen my picture. At the time, they told him that he probably had 10 years to live. He made liars of them; he's still around. In 2005, he was diagnosed with PH. The pulmonologist wasn't much help: shortness of breath? That's to be expected, considering the number of granulomas (my father calls them 'granolas') in your lungs. Come back in a year. If it's worse, we'll try prednisone again.


Bull. This wasn't the shortness of breath Dad was used to. He went to a cardiologist. The cardiologist ran various tests, and then proposed a stress test. A friend's father had died of a heart attack brought on by a stress test, so I wasn't too keen on the idea, but Dad did it. Walking? He'd done that all his life, fat or thin. Soon into the test, the cardiologist stopped him. He said he wouldn't have believed it if he hadn't seen it. My father had PH. The doc had only read about it.


Most docs don't know a lot about pulmonary arterial hypertension because it's so rare. The cardiologist didn't know much. It was a pulmonary problem, so he referred Dad back to the pulmonologist. This was the same fellow who had ignored the rapid heartbeats, the chest pain, and the drowning feeling. Dad wasn't going to go back to that 'idiot'. Since I work in CME, he thought I might be able to find better information, or at least a better pulmonologist.


My father doesn't really spend a lot of time looking up his ailments. That would involve thinking about the ailments, which causes him stress. The regular world offers us enough of that. For me, though, research eases stress, even when a quick cure isn't available. I Googled medical sites like WebMD and MayoClinic.com, and learned what I could about the subject. Eventually, I found the PH Association webpage. This is a support group primarily for PH patients and their families, but they also work with healthcare professionals to provide physician education on this rare disorder.


The site is great! It has understandable information about PH and its treatment, contact information for support groups across the country, news on PH research, and reading material you can order if you need more in-depth info (for example, for people who developed PH after taking Fen-Phen). They also had information on PH specialists, and I found one my father could see.


Since that time, which was scary as hell for everyone, my father's condition seems to have stabilized. He uses oxygen, but doesn't require a Flolan pump as of this writing. The current life expectancy for PH after diagnosis is five to fifteen years; Dad is chugging along at four. Let's hope he makes liars of the doctors again.


For more information, check out the PH Association's webpage. 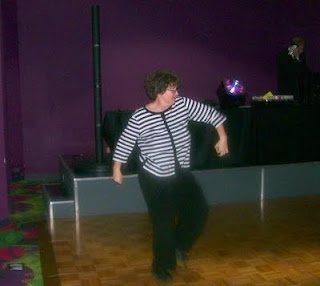 The first night at Bouchercon, we went to the Thursday Evening Extravaganza at Gameworks. All the games were free, plus there was music with a live D.J.

Well, I'm half Greek. You may not know this, but Greeks are compulsive dancers. Once Austin Camacho and his squeeze took the floor, I quickly followed. The evidence is below and, mercifully, quite dark. Just look for the moving stripes.