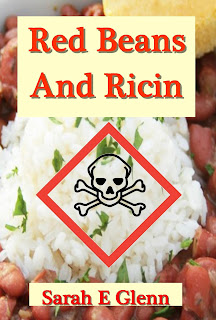 If you read "New Age Old Story" in Fish Tales: the Guppy Anthology, this is the follow-up. When partygoers become ill at a Mardi Gras potluck, Lana Fisher's red beans and rice are blamed. Bad enough, but when the hostess dies, the consequences could be far worse.

Red Beans and Ricin is free for Kindle Unlimited users, and only 99 cents otherwise. This story first appeared in Mardi Gras Murder. 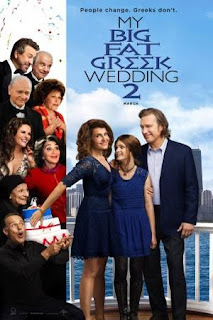 My family and I loved the original film; my father often said that it bore a strong resemblance to his courtship of my mother, sans the religious conversion to Greek Orthodox. Of course I wanted to see the sequel. Toula's family was wacky, lovable, annoying, and over-the-top Greek.

I was not disappointed. In a feat comparable to the recent X-Files miniseries, the cast reunited to play the same characters as before, but 10-15 years down the road. Due to the economic downturn, Toula is working in the family restaurant again, and has become a central support to her family, volunteering for committees, taking her father to physical therapy, and being the person the family turns to when things go wrong (as, of course, they do). Ian has become a high school principal. Their daughter, Paris, is graduating and desperately wants to get away from her overwhelming extended family. She is considering going to New York for college; her parents want her to stay in Chicago.

Did I mention that things went wrong? Well, they did. Gus, Toula's father, ardently wants to prove that he is descended from Alexander the Great. I think this is rather amusing, since the Greeks of Alexander's time considered him Macedonian and thus a xenos. While filling out his documentation for the genealogy website, he discovers that his wedding certificate (issued in Greece) hasn't been signed or stamped with the seal of the Church. He and Maria have been living in sin all these years.

Okay, so easy fix, right? They can get married in the church they go to. Not so fast, though: Maria wants Gus to propose properly. Apparently, his first proposal consisted of "I'm going to America; you can come with me, or stay here." Gus, being a stubborn ass, refuses to humor her. This is the first of several hurdles Toula must help the family cross before they get Gus and Maria to the altar. You didn't think this film was going to end with anything but a wedding, did you?

Oh, yeah, Paris makes her decision. Unlike the major plotline of the film, it was less predictable. Plus, we do get to see Toula and Ian realize that the majority of their interactions concern their child and the family, and wonder if there's any 'them' beyond that.

Part of the buzz going on about the film is the revelation that cousin Angelo is gay. They refer to it as cousin Angelo coming out, but it really was less of him coming out and more the family asking him if his business partner is something more than that (they are nosy, after all). Lo and behold, another xenos in the family, life goes on. I thought it was handled nicely.

I enjoyed the film greatly, but it doesn't really work as a standalone film. If you loved the characters in the original film, it's a good catchup. Otherwise, stick with the original.

Posted by Sarah Glenn at 8:30 AM No comments:

I grew up with the public fascination of the Kennedy assassination. It's spawned many articles, TV plots, etc. written with the notion of "What if..?" I wasn't interested in hearing another story about conspiracy theories or time travelers hoping to save JFK.

It was a while before I would give this book a tumble. I'm glad I did.

The core of King's talent doesn't center around his penchant for horror or his flights of fantasy; it's his ability to create good characters that the reader can truly get involved with. Jake Epping is a teacher who cares a great deal for the people around him. In the opening of the novel, we find him gripped with the story of Harry Dunning, a janitor seeking his GED. Harry's father killed everyone in the family but Harry when he was young.

When Al the diner owner shows Jake the portal to the past, Jake resolves to save Harry's family. After several attempts, he succeeds. The feeling of power, the ability to change bad to good, helps suck him into Al's dream: saving JFK to create a better world. This requires that Jake travel back to the Fifties (the portal only leads to one point in time, every time) and take up residence, trailing Lee Harvey Oswald's path until the Big Day (hence the book title). He accepts the mission.

Along his path in the past, Jake makes new friends, touches the lives of students, and falls in love with Sadie, a beautiful but straight-laced teacher. He also gets harsh reminders of how very different things were in the Fifties: people smoked like chimneys, racism was the norm, and singing Rolling Stone lyrics could nearly end a relationship. The story of Jake's new life is interwoven with his pursuit of Oswald. Sadie unbends and becomes part of his quest, helping him in the final confrontation.

King's talent at character creation, combined with his command of pop culture, immersed me in the story and the time period. Overall, 11/22/63 was a book that exceeded the concept it started with.

Spoiler below (highlight to read):

I would have given this novel five stars, but the ending disappointed me. When Jake returns to 'modern time', the world has gone to hell. Earthquakes, thunder, the works. He also encounters cosmic authorities who urge him to essentially undo his entire mission in order to save the present. By changing so many events in the past, he's warped the universe. While cosmic authorities worked well in Ur, I don't think they're as necessary here. King described enough events following JFK's survival to screw the world up without threatening the space-time continuum. The final echo of the love he and Sadie shared, though, was very sweet.

View all my reviews
Posted by Sarah Glenn at 7:51 PM No comments: