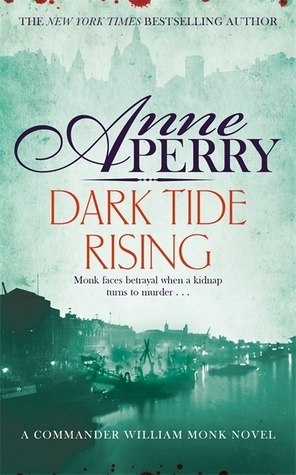 View all my reviews

William Monk has changed his profession several times since I began reading the series many, many years ago. Police detective, private detective, investigator for attorneys, etc. His position with the River Police, though, seems to have become his permanent berth. He's settled into the role, assumed the mantle of authority, and formed ties to his men, a change from the alienation he experienced in the early books. Those ties will be challenged in this novel.

Oliver Rathbone contacts Monk on behalf of Harry Exeter. His wife, Kate, has been kidnapped and is being held for ransom. Exeter is willing to pay the ransom, but it requires that he go to a very dangerous area along the river and he wants protection against robbery (en route) and double-crossing during the transfer. Monk accompanies Exeter personally and stations his men in nearby locations to try catching the kidnappers after the safe return of Kate. Instead, the double-cross does happen, and the police are ambushed in their locations.

Kate Exeter is dead, and clearly the kidnappers knew where Monk’s men were going to be. Someone has provided the information to the bad guys, and it could only be someone involved in the exchange. Monk must investigate his own men to clear or condemn them. They all have secrets, and they all have weaknesses… did one knuckle under to blackmail? Worse…bribery?

One of Monk’s men, John Hooper, often takes center stage during this novel. Like Monk, he is agonizing over the idea that they were all betrayed… and, as the secrets of his fellow officers are revealed, it becomes clear that he has one of his own, and it could cost him everything.

As Monk pursues his leads, the trail of crime enters Superintendent Runcorn’s patch. Runcorn, Monk’s old boss and former enemy, develops his own opinions on the case, which don’t always agree with Monk’s. Runcorn charges the husband with murder, and Monk, with Rathbone, work to prove Harry Exeter innocent.

The case ends with a twist I didn’t expect the author to make. It keeps the story from entirely sinking into the tawdry background of Monk’s many cases (since this is the twenty-fourth Monk novel).
I was pleased to see Monk’s men fleshed out further, even under the unpleasant circumstances, and I enjoyed Runcorn’s bold entry into the investigation. Monk’s wife, Hester, does appear in this book, though not frequently enough for my tastes. Scuff, their adopted son, is maturing nicely and has developed ambitions for his future. Beata, Oliver’s new wife, also makes a brief appearance.

Perry often ends the book shortly after revealing the killer; this is one of those occasions. I like a little more denoument, personally, but it wasn't too abrupt. It did remind me a little of a Perry Mason ending, where all is revealed on the stand.

I accessed this novel through NetGalley in exchange for an honest review.

Posted by Sarah Glenn at 4:30 PM No comments:


A remarkable amount of fundraising is going on, and much of it is for services we normally associate with the government, or at least public money. Meanwhile, the fields that used to produce income and ad buys, like journalism and fiction writing, has been reduced to begging for sponsors.

Meanwhile, the pizza people are paving roads, because it's not getting done.

Every day is Backwards Day, it seems.

In the last year or two, I've donated to help a child get necessary surgery, to help a friend who lost her home due to a fire, to help another friend in danger of losing the family's home due to outsourcing + crappy job market, and to bury a friend whose family couldn't afford a funeral. In all these cases, I had some form of personal connection to someone involved with the need. Think of all the unpopular people out there - and the names and faces change regularly - who aren't getting help because they are introverted or belong to whichever marginalized group is in bad odor.

This is why we need public funds for assistance: because shit happens. Businesses kept the money from the recent tax cuts for buybacks of stock and consolidating power, not creating jobs so fewer Americans would need to beg. Just because it's on social media doesn't mean it's not a form of begging. Charles Dickens would understand our society very well.