There's rejection, and then there's Rejection!

I am happy to report that I've never gotten as harsh a rejection letter as the ones in this book. The young woman featured early in the video doesn't understand that rejections to writers are best done via letter, because slush pile readers get stalked sometimes (check out pages 2 and 3 of this article). Let's be honest, some writers are whack jobs. More of us would be if it weren't for the invention of psychotropic medications.


My wife specializes in receiving 'nice' rejection letters - you know, the ones that tell you what a wonderful writer you are, but your story doesn't fit for whatever reason. She didn't know whether to be flattered or frustrated as hell. Fortunately, she recently received the most important acceptance of all and her first novel is on sale.


When I get rejected, I get form letters. When I don't get form letters from an editor, it's because they take issue with something in my story. Yes, I know that I should take these to heart and correct my mistakes. I do correct those mistakes, but there isn't enough Lexapro in the world to salve the pain of a writer who takes rejection to heart. No wonder writers are famous for drinking.


Have you ever gotten an exceptionally vile rejection letter?

I got real comments from my last blog on this subject, which went to my head. Actual readers! I had a suggestion from my spouse shortly thereafter, and I overheard another frequently asked question today, while she was discussing her new book. They've been burning a hole in my writing pocket since:

Another question I get a lot: What is your book about? I've decided that although this got annoying after the third person asked, it gives me the chance to practice my 'pitch'.

Perhaps I should talk about annoying questions writers get from other writers next. Unfortunately, I'm probably the asker.

Another question that came up in the comments from the first article: You're a writer? Where have you been published? Naturally, not all writers are published authors. This doesn't mean they're not writers, it just means they don't have published works yet.

I don't have a snappy answer for this one. Do you know why? Because I rarely told people outside the writing community of my ambitions until I was published. I received too many negative comments about wanting to be a writer while I was growing up. As an adult, I didn't spring that little secret on non-writers without something to show for it. By the time I 'came out' as an author at work, I'd edited two Pagan newsletters, received some local recognition as a political blogger, and had several published stories.

I salute the unpublished writers who are willing to 'go public' and deal with this last question. You're braver than I am. Might I suggest that you simply tell them that you're still revising your novel?
Posted by Sarah Glenn at 10:39 PM 3 comments:

UPDATE: The analysis results
give you a come-on for a vanity publisher. The analysis itself is pretty fun, though!

I've never even seen the movie Fight Club, much less read anything of Palahniuk's. One of the people at Coding Robots described the analysis process as follows: "It's the statistics of words, sentences, etc."


My stories include lesbian vampires, hospice workers doubling as occult detectives, and malicious misuse of nanotechology. None of them are peppered with S & M or people beating each other up for fun. Most of the time, in fact, my main characters would be leading quiet, productive lives (or unlives) if people would just stop messing with them.


I asked Coding Robots if Palahniuk used a lot of sarcasm.  The response: "If only iwl could detect sarcasm :) ".

Addendum: I Write Like has added several new authors to their repertoire in the last few days. I still write like Chuck Palahniuk.
Posted by Sarah Glenn at 8:22 PM No comments: 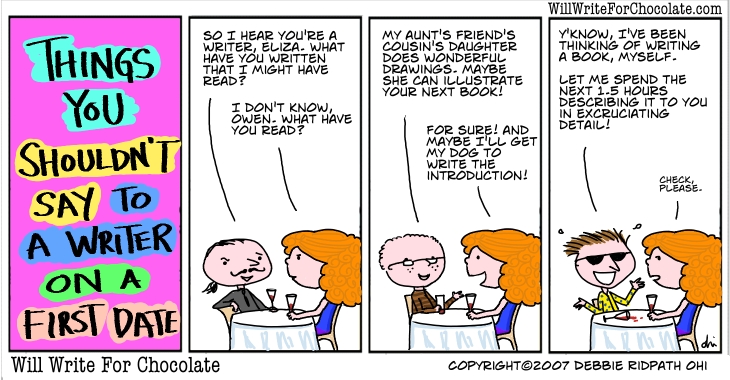 Click to see full-sized cartoon at Inkygirl's site!
Used with permission from Debbie Ridpath Ohi at Inkygirl.com.
Inkygirl has put her pencil nib on a few of the annoying things writers (especially non-famous ones) deal with when their non-writing friends learn that they are writers.

Here are ones I've heard, with less-than-polite truthful answers:
If any writers out there are reading this post (is that crickets I hear?), please add the questions and comments YOU'D rather not hear again. I need to be prepared.
Posted by Sarah Glenn at 3:52 PM 10 comments:

Recently, The Poison Review (an excellent resource site) reported: "Fox News discovers nutmeg abuse".
Teenagers have figured out that large amounts of nutmeg can make you high. This is not a new discovery; the knowledge has been around for a while. Something that the TV spot didn't mention is the indigestion that goes along with consuming substantial amounts of caustic spices.
Back in a previous model of yours truly, around Sarah 3.0 (I'm on at least 6.0 now), I worked at the reports desk of my local police department. We processed mostly crime reports, but every once in a while we would get a report on someone who had harmed themselves in a weird way. Nutmeg featured prominently in one of them.

Circa 1990, two young men decided to reach a legal high via eggnog decoration. They visited their pusher of choice, the local Kroger's, where they purchased one box of nutmeg and two half-gallons of milk. These fellows tried, tried to plan ahead - honest! When they got back to their place in UK's student ghetto, they divided the Banda Island gold between the two containers of milk. They covered and shook the contents vigorously, then chugged them down.

The report didn't specify whether they got high or not. It did specify, however, that they began puking uncontrollably. This was waaaayy past too much baklava. The two guys visited the local ER, where the staff immediately became suspicious. They'd begun throwing up only two hours ago...? They didn't know why they were sick, but they thought they needed medical help...? That set the BS alarms off, and the staff wormed the story out of the young men.

A report was filed with the police, but, really, these young men had broken no laws outside of digestive ones. They had already been punished, though, for their culinary creativity.

Signing in the Waldenbooks by Parnell Hall


I got clued into this video by John Clawitter's blog on 1st Turning Point. Parnell Hall is best known for his Puzzle Lady mysteries, but I'm fonder of Stanley Hastings. There's a lot of Parnell's own personality (and background) in Stanley, especially in the book Juror (click here for a sample read).

Part of why I'm thinking about Parnell's song is because my wife's book, Circle of Dishonor, is about to come out in print. She's setting up launch parties, and I'm working on her web site (please note there's no link for this yet). We're also hoping to line up some signing gigs... but I hope we have better luck than Parnell.

I sure hope Gwen is too busy to see this, come to think of it.
Posted by Sarah Glenn at 3:39 PM No comments: