In this legal thriller, assistant district attorney Andy Barber's comfortable and respectable life comes to a screeching halt when his fourteen-year-old son, Jacob, is charged with murdering one of his classmates. Andy is suspended from his position so he cannot unduly influence or garner information from the people he has worked with for years, cutting him off from the natural resources he needs to defend his son from the charges. Instead, he finds himself on the other side of the courtroom watching his greatest professional rival do what he can to put Jacob away for good. As part of the defense, Andy is forced to confront the dirty secrets of his own past, which he has never revealed to his co-workers, his son, or even his wife.

I normally don't read novels this length (421-page Advance Reader's Edition) unless I already know the author or the story itself grabs and holds my interest. Defending Jacob falls into the latter category. The description I gave above could easily be the trailer of a Lifetime drama, but this novel rises above a maudlin TV drama for several reasons. The disintegration of family trust is not a surprise, nor is it a shock to the reader when friends, neighbors, and co-workers turn against the family. What the reader doesn't get, though, is a reassurance that Jacob is innocent. Too many secrets aspects of the teen's life are revealed during the investigation: we learn that Jacob has a dark side. Bad decisions made by both the boy and his father (who knows better, but cannot help himself) also make proving innocence -or guilt- very difficult.

We also learn that Andy comes from a long line of violent criminals in which he appears to be the (only?) exception. He has spent his entire adult life keeping his heritage a huge blank spot, even to himself. Naturally, his family background comes out during the investigation. When the trial outcome appears darkest, the defense attorney tests Jacob for a specific genetic predisposition to violence that could mitigate his sentence. Andy is forced to visit his own father, Bloody Bill Barber, in prison to beg a DNA sample for corroboration. The relationship they begin to develop isn't pleasant, but it is interesting.

The ending has more than one twist. There is a certain point at which the reader may feel cheated, but stay tuned: the other shoe just hasn't dropped yet. Throughout the book, we read testimony that Andy is giving at a trial. It isn't until the end that we discover whose trial it is.

Overall, Defending Jacob is an engrossing read. It is well-written, outside of the genetics issue. Andy's willful belief in his son's innocence and the desperate acts he commits to shield his son drive this story, and kept me turning pages till I reached its open-ended conclusion.

View all my reviews
Posted by Sarah Glenn at 9:30 PM 1 comment:

Review: The Cradle in the Grave

The Cradle in the Grave by Sophie Hannah

From my understanding, this is the ARC of A Room Swept White, book 5 of the Spilling CID series. I have not read the 'final' print, so all comments pertain to this version of the novel.

I have noticed that many British authors fall into what I refer to as the Jane Austen Syndrome: it takes about 200+ pages before anything really interesting happens, although when it does it's damned interesting. P.D. James had the same problem in The Private Patient. This doesn't mean it's written badly, just not in the style an impatient American with Aries rising normally appreciates.

Fortunately, this was offset by the 'documentary' presentation of the original crimes and interviews with the women convicted of the child murders. I love true crime and reading the 'paperwork' involved, so this provided me with an early source of satisfaction that carried me until the heroine became interesting, too.

I was not at all sold on the relationship between Fliss and Natrass. Oh, I can believe he was a jerk, but I really don't understand how her ('her' being Fliss) attraction to Natrass particularly enhanced the storyline. I found Simon's dogged determination to hate his boss much more compelling. His outrage and mixed feelings upon finding himself on the same 'side' as his detested supervisor were very human and understandable.

Each of the bodies is found with a list of sixteen digits - four rows by four columns. When the solution to that clue came, I found it surprising and satisfactory.

Overall, I enjoyed the book, but think it might have been better without the viewpoint of Fliss Benson at all. Perhaps, if they had revealed certain aspects of her background earlier, I would not feel that way. I have read that the final version was a superior manuscript. I hope so.

View all my reviews
Posted by Sarah Glenn at 11:10 PM No comments:

Horror for the Holidays 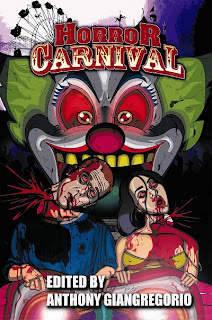 I had a very pleasant surprise yesterday: a story I expected to come out in 2012 is available now! Horror Carnival is a collection of several vile stories by experienced horror and pulp authors. Some of the notables include Matt Kurtz (who was also in The Big Book of New Short Horror), David James Keaton (of Plots with Guns fame), and, of course, prolific editor and author Anthony Giangregorio.

I need to update my Web page and my store on Second Life with this and other items. By the way, my wife, Gwen Mayo, has a store on Amazon. All of our stories are on there, plus others by people like Marian Allen, Bertena Varney, Amy Mah, Lori Lake, Patty Henderson, and Jeanine Hoffman. The music section is an eclectic mix of things from the Rat Pack to Ke$ha. Just a little nepotism for the holidays, folks...

The 2011 book tour is over, and NaNoWriMo is over as well. Finally, I get to come out of crazy writer mode - just in time to make the shift into crazy holiday mode. If I find the time between now and January, I might be able to do some book reviews. The great thing about attending Bouchercon is the number of free books and review copies the attendees receive. I have several interesting ARCs in the island of paper products surrounding my end of the couch.

Oh, yeah, I might want to sort that pile out. Right now, our living room looks like a ransacked library. Let's not discuss what the kitchen looks like.

But the first fun thing I'm getting to read is from my wife, Gwen Mayo. She's almost finished with the sequel to Circle of Dishonor. Guess who has the first 55K words of that sequel on a memory stick jacked into her laptop? You got it. I'm the person who sees her stuff before the beta readers. I guess that makes me the alpha reader.

Anyhoo: Sorry for the breaks between posts. I have been waaaayyy too active this year.
Posted by Sarah Glenn at 6:13 PM No comments: