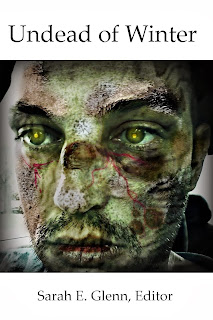 Today, I'm introducing James C. Simpson, the author of "Mit Den Augen Der Toten". It's a story that involves a bad place in a turbulent time, and some very cold weather. Phenomenally cold. If it can make me feel cold in Florida, that's cold!

Q. What gave you the idea for “'Mit Den Augen Der Toten”?
A. The concept for that story was a combination of things. It was based off of some actual firsthand accounts that were told to me by German soldiers who had fought in the east. World War 2 has always held a special fascination for me. It was the most epic time in history and had a very apocalyptic feeling. This real-life horror lends itself to supernatural terror very easily and I took it from there. You can sense an obvious Lovecraftian influence, but the isolation and the cold is based off of my own experiences in the wilderness and being alone. The winter is a great setting for horror because it really is a dead period. It's cold and bleak and it's little surprise that so many horror stories are set in these months.

Q. Your story was one of the best for conveying a true sense of cold. Did you research it, or is Pennsylvania that bad in the winter?
A. Pennsylvania has had some rough winters. No one wants to lose their power, but it is genuinely frightening to lose it in the winter. I've had that happen to me and it can be an arduous experience, especially if you don't have a generator!
The winter always creeps me out the most. All I see is dead trees and hear the whistling wind. No other time of the year does it feel more desperate and lonely.
No small wonder that Frankenstein bookends in the Arctic.
Some of the accounts are based off of my experiences, but others were taken from what I heard. I guess the Russian winter was so extreme that it actually turned the oil into gelatin. That's pretty scary. Not to mention, it was so cold that the abandoned livestock would actually die from exposure and die where they stood...literally, like statues.
I have no love for the winter. I love Christmas, because I'm sentimental like that, but after that, I'm ready for the summer!

Q. How did you pick the genre/setting/era you write in?
A. I have a certain obsession with World War 2 and own several books on the subject. In fact, I have another story being published in a few months that is also set during that war and contains a supernatural element. The war in Europe was of particular interest because of the dimensions of the conflict. Hitler was in effect, the last of the conquerors and it's frightening to think how close he came to taking over the world. I remembered some of the stories I had been told and combined them with the concept of an ancient evil, relative to what the Third Reich was. I have to imagine that the forces of darkness must love something like the Nazis. The Third Reich actually were obsessed with the occult, so that's where that idea came from. I have to figure that is they knew of some supernatural power, they would undoubtedly have wanted to use it, crazy as that sounds.
I feel like this might even be a hint at something future I'll write about, perhaps something mythological. I've had a concept for a long time about Nazis uncovering an ancient evil in an attempt to derive power from it, only to have it consume them and it may return again in future stories, possibly even a novel.

Q. What was your favorite part to write in “Mit Den Augen Der Toten”?
A. The beginning on the Russian front was some of my creepiest stuff. That was certainly interesting to write, but I confess, I never mapped out the story much, I just let it flow. I wanted something strange and unnatural to be found and when it came time to write about the remains of the camp, I just imagined this elemental force that raises the dead and that was pretty strange.  I had a dream about it and it was kind of unsettling, so I jotted it down and if it seems kind of whacked out, blame it on my dreams!
The toughest part when you write something like this is the ending. How do you properly conclude these things and make your readers remember them?
I really hope my last line wasn't too vague.

Q. What's your current project?
A. I have another story coming out in early 2014. That should be out in an anthology called “Luna's Children: Stranger Worlds.” I also have a few more writings on my plate, including another trip back to Nazi Germany, this time involving an ancient vampire, and I am trying to write a western horror, as that's another genre I am very fond of.

We look forward to seeing them!

Undead of Winter is available in print and Kindle format at Amazon. You can enjoy James' story there, along with other fine offerings from authors like Alex Azar, Stephanie Stamm, and D.J. Tyrer.

Posted by Sarah Glenn at 9:03 PM No comments: Links to this post

You Might Notice a Trend: Serious Ways To Celebrate Saturnalia

From Paul Wartenberg: author, NaNoWriMo 2013 winner, and author of a well-received story in Strangely Funny. You may find his post strangely funny as well.
Posted by Sarah Glenn at 8:17 PM No comments: Links to this post


Tom Wescott is an American criminologist specializing in the Jack the Ripper mystery. He's authored numerous original research pieces for journals such as Ripperologist, Ripper Notes, The Whitechapel Society Journal, Casebook Examiner, and The New Independent Review. In 2014 he will publish two full-length investigative works related to the Ripper case: The Bank Holiday Murders and The Berner Street Mystery.

With the story 'Coffin Dirt', though, he creates a story, not a research article. And what a powerful story it is! I write notes about each anthology submission in my spreadsheet to refer to later. Next to his, I wrote: "F---ing near literary." It's horror, but it's not just horror. Learn more about the story, and Tom, now.

Q: What gave you the idea for 'Coffin Dirt'?

A: Winter itself gave me the idea. It's my least favorite holiday. Very dangerous. And much of the stuff in the story happened to people I know. That was the true inspiration for the story. The rest of it just came as I was writing it. I didn't know where it would go until I got there, but I knew that I didn't want to write an identifiable 'monster', such as a ghost or vampire. I'm not sure what Tyson is at the end, but I know he's not an illusion.

Q: You have an interesting day job: criminologist. Could you tell us more about that?

A: Unfortunately, that's a hobby and not a day job. I have a passion for unsolved crimes and like to try and solve them to my own satisfaction. The Jack the Ripper mystery is my personal favorite.

Q: Tell us about your Ripper research.

A: I've studied the Ripper case since the late 90's and have published around 20 essays on the subject. I have two books coming out in 2014. The first (due in January or February) is called The Bank Holiday Murders: The True Story of the First Whitechapel Murders and will include new evidence that I believe will cause quite a stir in 'Ripperology'. The second book, due later in the year, is called The Berner Street Mystery and focuses on the murder of Elizabeth Stride, one of the victims. Lots of myths and mysteries surround this woman and her murder and the book is intended to provide as many answers as possible. Following these I'll produce a larger, more mainstream book on the Ripper case.

Q: What made you decide to start writing your own stories?

A: Like most writers I don't think I had a choice. I was compelled to write and so write I did and will do.

Q: Who is your favorite fiction author and what really strikes you about their work?

A: At this moment I really like Dan Brown and Steve Berry. Popular novelists with a historical bent. Authors who like to explore historical mysteries intrigue me because I like to do that myself. I also love reading horror short stories and buy anthologies as well as journals. I don't like most short stories I read, but when I find ones I like they're often more powerful than a good novel. A novel is like a good nap, but a good short story is like an energy shot.

If you'd like to learn more about Mr. Wescott's Ripper research, he recently did an interview on the subject for the Jack the Ripper Investigations Blog. Click here to whet your appetite for his upcoming publications.
Posted by Sarah Glenn at 9:09 PM No comments: Links to this post