Conservatives are crowing victory at Wendy's latest response to the increase in minimum wages. Instead of employing cashiers, they're laying them off in favor of automated kiosks. They say this is a matter of survival in this soft economy. Other companies, whose labor cannot yet be replaced by automation or computers, continue to send jobs offshore. In some cases, I'm sure it is a matter of survival for the businesses in question. In many cases, they're having to compete with a McDonald's or a Wal-Mart.

In other cases, the development of new technology has changed how products are delivered, and the market has changed accordingly. E-books have driven many bookstores into bankruptcy, for example, but no author or publisher can cut Amazon out of the equation without losing money. It has a near-monopoly on book sales.

Then, there's the matter of employee benefits. Many companies hire temp workers or only employ workers part-time to avoid the cost of employee benefits. I've even heard people argue that it provides an opportunity to 'monetize free time' and allows workers to travel to where the jobs are with an On The Road sort of virtue. That's fine for young, healthy, childless people or couples. It doesn't really work for older people or for people with kids.

Children have weaker immune systems and used to die before medical care became accessible to everyone. When you get past forty, perhaps fifty if you're in good shape, the warranties start to expire on your body parts and things will start going to hell. Plus, when you get past fifty, your parents will be in their seventies and they're going to need your help. That nomadic lifestyle will end with children or with age.

There will come a point when many people in the United States can afford to buy basic products, whether it be $15 or $3, because there are not enough service jobs to go around. People like to talk about bringing manufacturing jobs back; those have already been offshored and automated out of existence. The service jobs are the new victims, and many people will not be able to find new employment. Unless a job requires the presence of a human being in person, or it requires special talents and skills, it's going somewhere else. Not everyone is a rocket scientist, though, and Wendy's doesn't need rocket scientists.

I have a harsh message for American workers, with a follow-up for businesses who operate in the United States: the workers here are never going to be able to beat people in India who will work for a few rupees a day (never mind how I know this), or automated kiosks... unless the price of everything sold in the USA, including the products businesses require, drops to the price people pay in poorer countries. You know how ex-pats used to talk about living like kings in Mexico with a few bucks? Yeah, that's coming here or there's going to be food riots. We're going to have 'extra people' that are a 'burden on the economy', and it's not because they're lazy.

Will everything be on the dollar menu? Will the government have to increase taxes further on companies and citizens, to subsidize basic necessities for all the 'extra people' our country won't employ? Or will we have another price and wage freeze, like the one Nixon imposed?

I don't really have a great answer here; the truth is, many smaller companies are struggling to survive, and if they go belly up there will be no jobs. I get that. I do know, though, that I won't be eating at Wendy's any time soon... especially since my first job was as a Wendy's cashier.
Posted by Sarah Glenn at 11:10 AM No comments: Links to this post 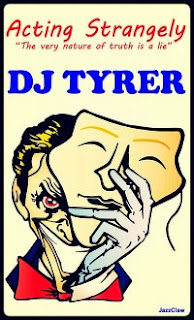 DJ Tyrer, who is the person behind Atlantean Publishing, was short-listed for the 2015 Carillon 'Let's Be Absurd' Fiction Competition, and has been widely published in anthologies and magazines in the UK, USA and elsewhere, such as Warlords of the Asteroid Belt (Rogue Planet Press), Strangely Funny II (Mystery & Horror LLC), Destroy All Robots (Dynatox Ministries), Steam Chronicles (Zimbell House) and Chilling Horror Short Stories (Flame Tree), State of Horror: Illinois (Charon Coin Press), and Irrational Fears (FTB Press), as well as issues of Sirens Call and Tigershark ezines, and also has a novella available on the Kindle, The Yellow House (Dunhams Manor).

What would you like people to know about you?
As little as possible! Perhaps, that I edit the Atlantean Publishing small press, which is currently working with the press Carrion Blue 555 on a King in Yellow anthology titled A Terrible Thing which is planned for release in paperback towards the end of 2016.

When did you begin writing?
Well, I've been writing ever since I could hold a pen, but in a published sense, around twenty years, for the first decade within the British small presses, but internationally and with greater visibility in recent years.

How did you get the idea for your story in Strangely Funny III, "Attack of the Rad-Zombies"?
Bad B-movies!

Is there a genre you haven't written in, but would like to?
I've tried most genres (whether successfully or not is another question!) as I enjoy the challenge of tackling the unfamiliar, but the ones I would like to do more of and have success with are crime and thrillers (without a supernatural element). I'd also like to have the time to tackle my ideas for novels!

Who are your current favorite authors? What do you enjoy about them?
I frequently reread HP Lovecraft, Robert E. Howard, Clark Ashton Smith and RW Chambers, while I enjoy James Patterson and Clive Cussler for relaxation with a fun adventure. Naturally, I read a lot of fiction and poetry submissions and review material for Atlantean Publishing and I always look forward to work by writers such as Neal Wilgus, Steve Sneyd and Cardinal Cox in particular. 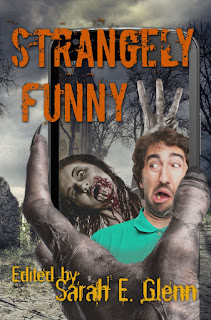 What are you working on next?
Other than the usual round of short stories and poetry for submission to various anthologies and magazines, I've got three novellas in various states of progress, as well as a couple of collections that I would like to progress to the publication stage.

What is your favorite writing snack food/drink?
I seldom snack when writing, but I do drink a lot of Pepsi Max (although I've been cutting back in favour of water recently).

Thanks for your virtual visit!

To read "Attack of the Rad-Zombies" and a bunch of other hilarious stories, check out Strangely Funny III, now available at Amazon in print and Kindle formats.