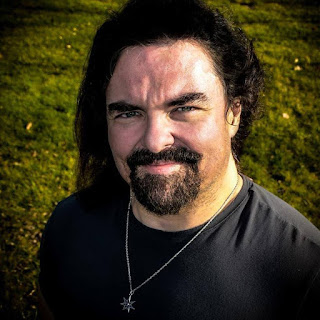 About the author: Stephen Zimmer is an award-winning author and filmmaker based out of Lexington, Kentucky. His works include the Rayden Valkyrie novels (Sword and Sorcery), the Rising Dawn Saga (Cross Genre), the Fires in Eden Series (Epic Fantasy), the Hellscapes short story collections (Horror), the Chronicles of Ave short story collections (Fantasy), and the Harvey and Solomon Tales (Steampunk).
Stephen’s visual work includes the feature film Shadows Light, shorts films such as The Sirens and Swordbearer, and the forthcoming Rayden Valkyrie: Saga of a Lionheart TV Pilot.
Stephen is a proud Kentucky Colonel who also enjoys the realms of music, martial arts, good bourbons, and spending time with family.

Viking Prince Einar (in the 1958 Film The Vikings): Played by Kirk Douglas magnificently, Prince Einar was one of my first encounters with Vikings on screen.  I remember watching him run the oars of the longship in amazement (which Kirk Douglas really did, that was not special effects!).  This character was part of what drew me to become interested in Vikings, and definitely deserves a place on this list.

Harald Hardrada: Harald Hardrada is a very interesting figure, as a good argument can be made that the Battle of Hastings might have turned out very differently if the Saxons had not had to fight at Stamford Bridge against him before marching south to fight at Hastings.  He had extensive travels too, and for a time was even a member of the famed Varangian Guard in the Byzantine Empire.  He was said to be a very huge warrior too, in terms of physical stature, and in some ways was an inspiration for my Ragnar Stormbringer character in the Rayden Valkyrie: Saga of a Lionheart TV Pilot.

Olaf Trygvasson:  I've always found the history of Olaf Trygvasson fascinating, from his turbulent youth (involving some harrowing escapes) up to becoming King of Norway, and then his end at the Battle of Svolder, where he fought to the end and then jumped off his longship before his enemies could kill or take him prisoner.

Rollo (Vikings TV Show version):  In the TV series Vikings, I have to say I loved the Rollo character.  He is tough and has a great presence on screen, and the development of his character from Berzerker to a Duke in France is a very engaging part of the storyline.  Rollo historically is behind a group of Vikings who settled Normandy, whose descendants became the Normans that one day conquered England after the Battle of Hastings.

Herger the Joyous:  Herger was a character in the movie 13th Warrior that I absolutely loved.  He was the one who, when Antonio Banderas' character found a sword heavy, told him to “grow stronger!”.  Full of life, good-natured, and a tough warrior, Herger was a compelling character in that film.

Leif Erikson: Leif Erikson had to have tremendous courage to undertake the voyages that he did.  He visited North America centuries before Columbus, and there are identified sites that may confirm the settlements mentioned in the Sagas. Greenland was not the easiest place to carve out a living in either. Leif Erikson's world was definitely not one for the faint of heart.

Cnut the Great: The Vikings did indeed take control of England prior to the Battle of Hastings in 1066, and Cnut the Great not only invaded and conquered England, but also ruled it for over two decades.  His rule as a King also extended to Denmark, Norway, and part of Sweden.  Very impressive feat for a Viking in those times!

Haakon the Good:  A Norwegian Viking King who had a long rivalry with the famous Viking Eric Bloodaxe and his sons, Haakon was a very sharp commander who again and again prevailed against stronger forces sent against him.  I've always admired underdogs and Haakon triumphed repeatedly as an underdog in the Viking age.

Ivar the Boneless (Vikings TV Show):  As mentioned earlier in this post, I am drawn to underdogs, and Ivar the Boneless is certainly an underdog in the TV show Vikings as he lives in a very tough age of warriors without the use of his legs.  Nevertheless, his wits, intelligence, and determination see him overcome foes, survive, and grow.  He is not a good character in a moral sense, he is hardened and sometimes very cruel, but he is a survivor and in an age that was not compassionate toward those with disabilities.  He has lived a life against seemingly insurmountable odds to become a major leader of Vikings, and for that relentless drive and determination he makes my list here.

Book Synopsis for Heart of a Lion: Rayden Valkyrie. She walks alone, serving no king, emperor, or master. Forged in the fires of tragedy, she has no place she truly calls home.

A deadly warrior wielding both blade and axe, Rayden is the bane of the wicked and corrupt. To many others, she is the most loyal and dedicated of friends, an ally who is unyielding in the most dangerous of circumstances.

The people of the far southern lands she has just aided claim that she has the heart of a lion. For Rayden, a long journey to the lands of the far northern tribes who adopted her as a child beckons, with an ocean lying in between.

Her path will lead her once more into the center of a maelstrom, one involving a rising empire that is said to be making use of the darkest kinds of sorcery to grow its power. Making new friends and discoveries amid tremendous peril, Rayden makes her way to the north.

Monstrous beasts, supernatural powers, and the bloody specter of war have been a part of her world for a long time and this journey will be no different. Rayden chooses the battles that she will fight, whether she takes up the cause of one individual or an entire people.

Both friends and enemies alike will swiftly learn that the people of the far southern lands spoke truly. Rayden Valkyrie has the heart of a lion.

Heart of a Lion is Book One of the Dark Sun Dawn Trilogy. 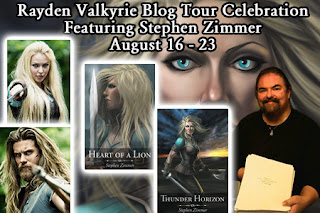 Posted by Sarah Glenn at 6:00 AM 3 comments: Links to this post