We were treated very well by the people at Gulf Gate. They had the rooms set up with chairs and tables, plus they had fruit and bottled water available in a nearby room. The Friends of the Library provided us with lunch, which was generous and much appreciated. 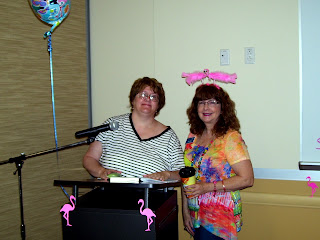 Adult Services Coordinator Ellen India was in charge of the event, and she introduced us as the newest Sisters in Crime chapter in Florida.

Ellen wore the Headdress of Power, which was subsequently passed on to me. 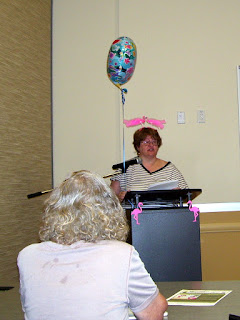 I did a short talk about using dialogue as a tool in writing - how it could provide useful information in a "showing" rather than a "telling" way (which sounds counterintuitive), but could also be used to reveal character.

I fear my serious manner may have suffered slightly while I wore The Headdress of Power. 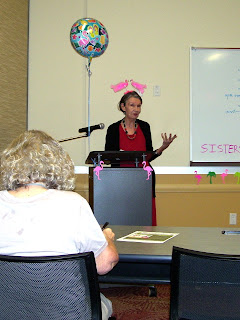 Louise Titchener followed up with a writing workshop on the practical aspects of dialogue - tags, surrounding narrative, adding action, etc. The fun part was the 'pencils on' section.

First, we read a passage of dialogue that was turgid with excess narration and adverbs. We were invited to edit the passage and present the new (and improved) version to the group.

Then, we took a passage from John D. MacDonald that had been stripped down to only what was spoken, and asked to fill in the blank spaces between the lines. After we'd finished, Titchener read what MacDonald had written.


The Suncoast News Network was there to interview Ellen India about the Sisters in Crime program, and we were later especially gratified to see Gwen's book covers featured in the footage. 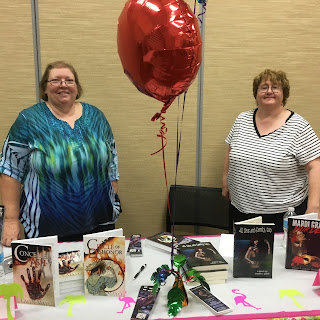 Naturally, Gwen Mayo and I had a table set up in the authors' room. We had some sales, and I got to try out Square on the new phone.

I'm afraid we were out of copies of History and Mystery, Oh My!, which contained the stories that were finalists for the Agatha Awards. Time to reorder!


In the afternoon, we had a panel discussion on unraveling the mysteries of publishing. The panelists were Gwen, representing Mystery and Horror, LLC, Brenda Spaulding, who had started by self-publishing, and Janet Heijens, a traditionally published author. The moderator was Yours Truly, who probably gave too many asides.

The panel was followed by a Q and A session that was pleasingly active.

Unfortunately, everyone who shared pictures with me was on the panel. So, I will end here with another pic of me wearing The Headdress. 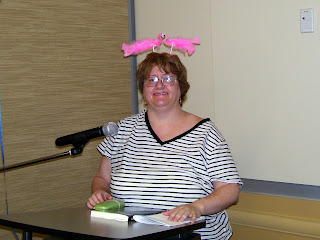