What with all the excitement, I forgot to mention that I am participating in National Novel Writing Month again. I've never 'won' by getting 50,000 words written during the frenzy that is NaNoWriMo, but it always gives an amazing boost to my Work In Progress (WIP). I appear to be a gregarious writer, an adjective that one wouldn't usually apply to me. The write-ins with the local Wrimos and camaraderie I've found on Twitter are just great, not to mention the ideas and support I always get at the NaNoWriMo website.

I don't really follow 'the rules'... well, not every time. I did actually start one WIP during NaNoWriMo, but usually I use the month to beef up my word count on something I already have going. I can also tap the knowledge and suggestions of other Wrimos to add the proper details to my plots. If you want to know a good place to dump a body, someone in the Forums can tell you. If you want to know what the student ghetto at a specific university looks like, one of the Wrimos on Twitter can help you. If you hate yourself and want to die, there's a special forum just for you with people who will commiserate.

Right now, I'm working with a hero that really doesn't want to come across with his personality. I know his background, I know his opinion on certain things, I know what drives him, but he's just... dithering. Unfortunately, this means he resembles me in a way he shouldn't.

Guess what? There's a thread in the Forums where you can write to your characters. Here's my letter:

I'm finding it hard not to give up on you. I've been trying to write you for the last three years, but you keep dragging your heels.

I know your background. I know what drives you - when you move, which seems to be never. I've gone to two plotting workshops to assist me in figuring out what to do with you. I have at least some rudimentary ideas, but you're not helping me out here. You just hang around my head, moping about what a great book you could be. I notice this doesn't actually lead to your helping me WRITE you.

Cade, or should I say Cad, I'm pissed. You won't help me write you, and you won't STFU and let me move on to more cooperative characters.

So... remember the head I stuck in your crawlspace last year? That was just smelly. This year, I'm threatening your job, your wallet, and possibly your family. I'm even thinking about killing Marina's cat and stuffing it in your gym bag. You are the Character, but I am the Goddess of your world. I answer to the Muses, but YOU answer to ME.

It's time to sh*t or get off the pot.

Will this work? Maybe, maybe not. But I know the other Wrimos will get a good laugh out of it, and it was fun to write. That's what NNWM is all about. Writing.
Posted by Sarah Glenn at 8:18 PM 2 comments: Links to this post

Pulmonary Hypertension: Update on My Father

Once again, it's Pulmonary Hypertension Blogging Awareness Day. If you read my post last year, you know that my father has this disorder.

Time for an update: Dad is using the oxygen tank more frequently. After a stretch of 'holding steady', he had a serious drop in heart/lung function this fall. He's been having trouble getting out of his chair, being lightheaded when he stands, and having to rest/nap after even mild exertion.

As far as I can tell, he has gone from Class 2 to Class 3 pulmonary hypertension. This is not a good thing. The doctor has been trying Revatio with him. Never heard of it? Yes, you have... its other name is Viagra. Unfortunately, it has no fun 'side effects' for him.

Dad says that it's not working very well in other ways, either. He isn't as bad off as he was, but he's still not functioning well. The doc didn't think the Revatio would perform very well, but he wanted to see if it made a difference before moving on to stronger drugs - the sort with the FDA black box warning.

Now, my father is hoping to get onto Tracleer. It's strongly counterindicated for pregnant women (not an issue for a man in his seventies) and people with liver problems. In some cases, it can actually damage your liver. It is only doled out in 30-day allotments at a time by certified doctors and authorized pharmacies, and patients must have monthly liver function tests. Yes, that dangerous.

Oh, and expensive! It could easily cost him over $600 a month with health insurance. Or so he says. He also said 'a little under 14K a year', so I think he's lowballing for my sake. Meanwhile, he's taking 2 Revatio a day instead of 3 so he won't have to buy more before he sees the doctor about the Tracleer.

Since this is a degenerative condition with no cure, eventually Tracleer will not be effective either. The next step will be continuous subcutaneous or intravenous medication with a pump.

It's a sad decline to watch. On the other hand, I have been blessed to have him for this long. It's been five years since his diagnosis. By this time, half the people diagnosed with PH are already dead.

To learn more about Pulmonary Hypertension, click here.
Posted by Sarah Glenn at 3:43 PM No comments: Links to this post


Parnell Hall sets up the rules for writing suspense in this novel: literally. Kenneth P. Winnington, husband of Stanley Hastings' new client, writes suspense novels for a living and is happy to share them: Don't write in first person. Don't use a continuing character. Don't let the hero know the danger he's in.

Parnell Hall breaks all these rules in the commission of this novel, including one more, but revealing it here would give away the ending.

View all my reviews
Posted by Sarah Glenn at 8:18 PM No comments: Links to this post

MY BOOK HAS A PUBLISHER! 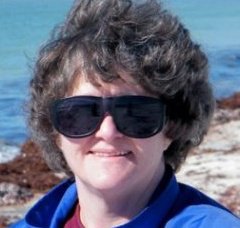 I received the good news last night. Pill Hill Press has accepted my first (completed) novel and will publish it in 2011. I am dancing on air! Okay, would you believe the carpet?

Gwen, Karen, and I toasted the good news last night with Code Red Mountain Dew. Hey, it's blood-colored... if you're the Kool-Aid Man.

The title is All This and Family, Too. Lesbian vampire moves her family into a gated community in Southern California. There, she learns the meaning of true horror.

Any suggestions for 2011 conventions and potential reviewers would be appreciated. I need to plan ahead.

Huzzah!
Posted by Sarah Glenn at 9:32 AM 10 comments: Links to this post

Email ThisBlogThis!Share to TwitterShare to FacebookShare to Pinterest
Labels: All This and Family Too, novel, Pill Hill Press

Since it took place over Halloween, costumes were encouraged for the Saturday night banquet. Gwen and I went all out, deciding to go as Baby Face Nelson and "Darla", his moll. We picked up the jacket and gown from Goodwill, the garter holster and feather boa from the Halloween store, and the purple pistol from Meiers. Gwen made my headdress herself. To complete the costume, I had to reacquaint myself with some of the feminine arts: lipstick, makeup, and leg-shaving. That last is definitely not in the Lesbian Handbook.

Gwen was pleased with my look, though. She took several pictures. Later, I discovered that crossing your legs in a slit dress means your lap is covered and everything else is exposed. One is definitely not going online. I looked like a Georgia O'Keefe painting: petals spread wide, and stamens hanging out!

At the banquet, they had the people in costumes parade around so everyone could see them. Prizes were also given out. I am afraid that we lost out to "Bonnie and Clyde", who had professional costumes. Several people told us afterward that we were robbed. Even so, we had a great time.

Perhaps I'll be able to write more about Magna later. NaNoWriMo is taking most of my 'spare' time at the moment.
Posted by Sarah Glenn at 10:56 PM No comments: Links to this post